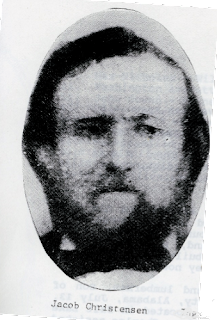 His boyhood days were typical of the times in which he lived. His parents earned their scanty living by fishing. When a young man he spent two years in the service of his king, as was customary. He served as a sailor.

Jacob joined the L.D.S. church in his native land on February 20, 1853 and was a traveling elder for the following two years. He married Inger Kristine Thomsen January 19, 1855. She became the mother of nine children, the eldest being born in Denmark before immigration.

In 1857 they immigrated to the United States. a perpetual emigration fund came into being through the desires of the church leaders to bring to this land those too poor to provide themselves with the transportation money which was needed.

Jacob's mother accompanied them to Omaha, Nebraska, where she died a short time later. They were compelled to stay here for two years, because of lack of funds to go further. Here, although he took whatever employment he could get at sawmills and adobe yards, they lived under the most trying circumstances. One time he was obliged to trade one shirt, of his meager supply of two, for a bushel of frozen turnips, which they boiled and then warmed up in tallow. While crossing the plains Jacob and his good wife encountered a great misfortune. Their only child died.

They located in Mt. Pleasant, among the first settlers in the fall of 1859, living in a dugout until the fort was built. Jacob helped to build the south wall of the fort, furnishing team, wagon and his own work. Homes were built against the inside walls of the fort where the settlers lived. By the fall of 1859 Mt. Pleasant had a population of 800 people.
Jacob Christensen Grave Marker

The First Ward was organized at Mt. Pleasant, July 9, 1859, by Elders George A. Smith and Amasa M. Lyman. William S. Seely was ordained bishop. Jacob Christensen became his first counselor. The Bishop and his counselors were looked upon as the leaders of the group. They were the superintendents, planners, confidant tribunal, directors, ecclesiastical tribunal, the leaders of the group, in fact the responsibility of the settlement rested upon their shoulders.

They were all busy people those days, building homes, a fort, clearing and plowing land, planting crops, building fences, canals, fighting and guarding against Indians, harvesting crops and a score of other jobs.

Thereafter, Jacob devoted much of his time to building up of this community. He was a shareholder in Mt. Pleasant's first cooperative institution and organizer of the United Order here. He served as Counselor to Bishop William S. Seely for seven years and as president of the High Priest's quorum for twenty five years.

January 14, 1865, he married Ingeborg Anderson, daughter of Christian and Karen Anderson. Ingeborg was the only daughter and the youngest of a family of four, born in Seiland, Denmark, April 28, 1846. Her father was a tailor, and Ingeborg had a comfortable childhood attending the schools of the town until her parents accepted the Latter-day Saint Church and decided to leave their homeland for Utah, where her three brothers had already settled. This was in 1862.

Plurality of wives was in flower at that time. Those who could afford two families and were worthy could get permission of the Church authorities to marry a second wife. Jacob asked Ingeborg to marry him, and after due consideration she accepted his offer of marriage. The were married, January 1865. She was 19 years of age and he was double her age, but it seems at that time, this was often the case. Ingeborg became the mother of seven children, two dying in infancy.

About this time Jacob took a very active part in the Black Hawk War, being captain of Company A, Mt. Pleasant Militia and was in several engagements with the Indians. He was also a Councilman in Mt. Pleasant's first city council.

On March 15, 1869, he married his third wife, Anna Christena Marberg, daughter of Johannes and Christine Peterson Marberg, who was born March 2, 1850 at Leitse, Gutland, Sweden. She was the second child in a family of four daughters.

They were married in the Endowment House in Salt Lake City. Their first home was the Haage home about 411 South State Street, Mt. Pleasant (now vacant). This house, built by Jacob Christensen was considered one of the finest residences of the early days.

Anna became the mother of ten children, three dying in infancy, one in youth and two in middle life.

Jacob died March 9, 1915, having been an invalid for eleven years.