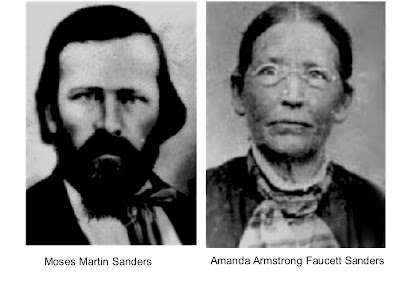 Moses Martin Sanders was born on the 17th of August 1803, the son of David Sanders and Mary Allred in Georgia.  He had two brothers and two sisters; William Hamilton,  David James, Sarah and Nancy sanders.  Two of the children were born in Tennessee, where his parents moved sometime after they married in about 1802.  Moses Martin married Amanda Armstrong Faucett on the 12th of January 1826.  They were the parents of twelve children:

Moses Martin and Amanda were members of the L.D.S. Church in its early infancy and suffered inhuman treatment at the hands of mobs in Missouri along with the rest of the early Latter Day Saints.  During the Nauvoo Period, the Sanders family lived neighbors to the Prophet Joseph Smith and his family.  Moses received his patriarchal blessing in Nauvoo, given to him by Isaac Morley.

When the Prophet Joseph Smith called for members of the Church t5o bring in their deeds to their property in Missouri, Moses Martin was among the first to come.  The  Propghet said to him, "Brother Sanders, you have done this day that which will entitle you and your posterity to an everlasting inheritance in Jackson Co. Missouri."

Moses Martin received his endowments in the Nauvoo Temple on January 1, 1846.  while in Nauvoo, Moses Martin married a second wife before they were driven from there.  Her name was Mary Jane Sanderson.

In 1859, Moses Martin and some of his married children were called to Sanpete County.  They helped to build the fort in Mt. Pleasant, and then moved north to Fairview.  While the men were busy building a fort and church in Fairview, the women resided in Mt. Pleasant.

In 1865, Moses Martin and his married sons were called to the Dixie Cotton Mission in Southern Utah.  Here again they shared the trials, hardships and toil that went into the conquering of a new frontier, as well as a new industry ----cotton.  They also worked on the building of the temple in St. George.  Moses Martin had quite a lot of land and cattle there.  Moses Martin Sanders died at St. George on November 8, 1878.

the above is taken from the "Sanders Saga"  family newsletter 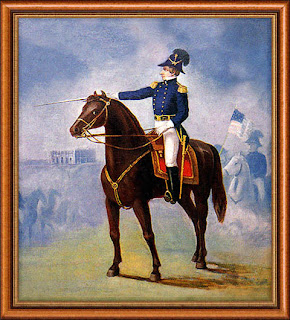 given to him by Moses Martin Sanders.

While living in Nauvoo, Moses Martin sanders and his wife Amanda Armstrong Faucett Sanders lived as neighbors to the Prophet, Joseph Smit, and they cherished their association with the Smith Family.  Moses owned a very beautiful, but unruly horse.  as Moses was often away from home, performing church duties, it fell to the lot of Amanda to lead this horse to water and she was really afraid of him.  He was very high spirited.
One day the Prophet Joseph said to his neighbor, Moses, "Brother Sanders, give the horse to me and I'll promise that you will never lose by it."  Moses Martin replied, "I would, but I am afraid that he may hurt you."  Then the Prophet said, "No, he would never hurt me."  So Moses tossed him the rope and said, "He is yours."  The horse was called "JOE DUNCAN", a very beautiful, intelligent animal.
The picture above shows the Prophet Joseph Smith dressed in his Lieutenant General uniform.  The Prophet rode this horse in maneuvers of the Nauvoo Legion and many other occasions.

AMANDA ARMSTRONG FAUSETT SANDERS
Amanda Armstrong Faucett was born May 6th 1810, the fifth child of Richard Faucett and Mary McKee.  Before she was sixteen years old, she married Moses Martin Sanders who was then twenty three.
She and Moses lived neighbors to  the Prophet Joseph Smith and family in Nauvoo.

Her life was one move after another and always to new frontiers where it was very difficult and often dangerous.  she was a helpmate and companion to her husband.  She gave birth to 12 children.

She was given a patriarchal blessing by the Patriarch, John Smith.  Her blessing told her that she not only shared in the priesthood of her husband but in the absence of Elders, she should have power to heal her children by the laying on of hands.

Amanda  helped pioneer Mt. Pleasant and also Fairview in 1859, then in 1865 they were called to the Dixie Mission near St. George.  There they built a sawmill and furnished lumber for the St. George Temple.  While living in St. George, she lost her husband and moved back to Fairview.
In 1881, she and some of her sons answered the call to help colonize Arizona.  They moved to Tonto Basin.  this move was about the twelfth move for Amanda.  She passed away on April 24, 1885.

Posted by Kathy Rigby Hafen at 1:59 AM