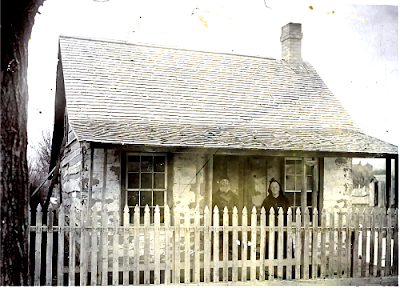 Conderset Caratat and Mary Napier Rowe, sitting on their front porch. This picture was prob ably taken while they were living in Mountainville. 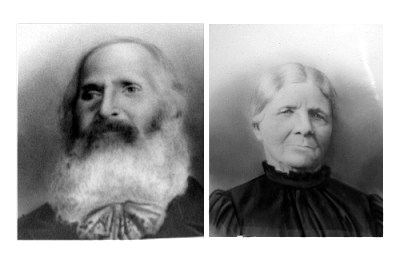 Excerpts taken from histories by Loretta Rowe Burnside and Jennie Allred Brotherson. Both Histories can be found in the History of Mountainville by Melba Hill.
Caratat Conderset Rowe, son of William Niblo Rowe and Candace Branchard Rowe, was born in Perry Township, Delaware County, Indianaon May 11, 1823. The family had migrated from the northeastern states. He often told his grandchildren that his name was Caratat Conderset Nichols John Rowe. The grandchildren thought this was just another joke that their witty and fun-loving grandfather was telling them. But he may have been named for the Marque de Jean Marie Antione Nicholas Caratat Condercet. Caratat was of medium height and had dark brown hair and brown eyes.
It seemed that the Rowes lived near the Latter Day Saint Church headquarters and were acquainted with the early church leaders whom they respected. As a youngster, Caratat heard the gospel from missionaries. It was not until he realized how much the “Mormons” were being persecuted for their faith that Caratat became interested. He was baptized August 12, 1842. As a young man he married Mary Napier, a lovely blue eyed, red haired Scotch lassie who was a “Mormon” convert immigrant.
Mary Napier was born March 30, 1823 in Kilayth, Lanarkshire Scotland. Her parents were Janette Gillis and John Napier. Mary was descended from the royal family of Scotland and of Ireland. Genealogists have traced her lineage back for many generations; on one line to 1700 B.C. She was of the royal line of Judah through King Zedikah according to Church records. Many interesting facts are thus brought out concerning her ancestral lines and their history.
When missionaries of the Church of Jesus Christ of Latter Day Saints preached the gospel in Scotland, Mary and her sister Isabella were converted. They were baptized, though it is not known if at the same time. Mary and Isabella were the only ones of their family to come to America. It is not known at this time if Isabella ever came to Utah. Elder Franklin D. Richards was one of the missionaries who preached the gospel to Mary.
Mary’s great faith and the friendships she gained kept her happy. She seemed to enjoy the spiritual gift of Vision of Prophecy. Many times she knew of coming events before they actually occurred.

An Indian whose name was James Onumph used to come to the home of Mary and Caratat Conderset Rowe quite often when they were living at Mountainville. Once when he was visiting with them, "Indian Jim" as he was called was talking with Grandma Mary. He asked her a question pertaining to a principle of the gospel and Mary was attempting to answer the question. She started to speak then said, "I wish that I could answer your question so that you could understand. I would like to have the language to explain it to you, and to make it clear to you". Then thge Indian said to her "Stand Up". She began to speak. Again he said, "Stand Up". Mary stood up, and began to speak to him. Onumph nodded his head and Onumph again nodded his head. It was plain that he knew what she meant. But no one else in the room could understand, even her sons and daughter-in-law. She spoke in a language which her children did not understand. But James Onumph or "Indian Jim", clearly understood what she said. Grandma Mary Napier Rowe had spoken with the spiritual gift of tongues.
Posted by Kathy Rigby Hafen at 4:36 PM No comments: