William Zabriskie was born the first child of the family of Lewis Curtis and Mary Keziah Higbee Zabriskie, on 13 September 1839 at Quincy, Adams County, Illinois. The family removed to Nauvoo and a short time later to Ambrozia Branch, Lee County, Iowa Territory, although Ambrozia Branch was not organized until a few years later than this. The Zabriskie family resided there for some time whereafter they moved to Council Bluffs, Pottawattamie County, Iowa, while on the way there to meet the Saints, as all the Saints were instructed to do so after the death of the Prophet. William’s mother died near Florence, Nebraska. William being a only a little over seven years of age. After the family arrived at Council Bluffs, William’s father, Lewis, married Sarah Ann Park. They made their home in that locality for some time after which they joined a company coming west in the year 1851 arriving in Salt Lake September 23, 1851. They settled first in Provo, later moving down the southern part of Utah, first locating in Pond Town (Salem), Moroni, North Bend (Fairview), Sanpete County, and finally locating in Springtown (Spring City) where his father, Lewis, was a farmer. In the year 1852, July 19, William was baptized along with his sisters Ellen and Hulda, and his father was re-baptized. Williams married Christine Rasmussen or Nielson. She was born 23 December 1841 in Denmark and came with a Nielson family to Utah. In many instances she has been found with the two different names, of which she did adopt the Nielson name, having lived with this family. William married Christine 20 August 1859 at Fairview, Sanpete County, Utah. William took part in the Walker and Blackhawk Wars. He moved to Mt. Pleasant in 1859. He finally located in 1864 where he opened a store and conducted it until 1870. He engaged two years in mining then entered the law office of R.H. Robertson in Salt Lake. He was admitted to the bar in Provo, 27 March 1876 and practiced in Provo and the district Court. He served as U.S. Commissioner about six years. He incorporated the Mt. Pleasant Milling Company of which he was Secretary; also the Moroni and Mt. Pleasant Irrigation Ditch Company being Secretary also a director. He procured the franchise and effected the incorporation of Mt. Pleasant Electric Light Company and was a stockholder. In the year of 1856, December 20, William consecrated the property he had to the Lord in the Provo Stake of Zion in the amount of $175. This we find was preached by President Brigham Young in a sermon on Consecration, June 3, 1855 in the Tabernacle, wherein he remarked that among the first revelations given to the Church and would probably be one of the last to be lived, was the law of Consecration. The principle of it was easy to understand, but the application of it was difficult. “How long have we got to live before we find out that we have nothing to consecrate to the Lord—that all belong to the Father in Heaven; that these mountains are His, the valleys, the timber, the water, the soil; in fine, the earth and its fullness.” It was to be distinctly understood that no person deed his property unless he feels it to be a privilege and prefers to do so of his own free will and choice. Neither do we wish any person to deed any property which is encumbered by debt or liabilities. Many deeded their property to the church in this period of time. (Heart Throbs Volume 4) “Consecration of Property to the Lord” page 316 (Oreen L. Walker). Some of the material in this history of William Zabriskie was taken from a book of Sanpete County, Utah found in the library of Brigham Young University. Also at the Geneological Library in Salt Lake (Utah S 7). Following is an account of the children and to whom they were married: (1) William Henry, born 16 July 1861. Married Emma Fredrickson. (2) Sarah Ellen, born 20 September 1863. She died as a child. (3) Isaac Newton, born 23 December 1865. Married Mary Carrie Eliza Wise, 22 March 1895. (4) Helena Christena, born 10 February 1868. Married Wood Brandon. (5) Charlotta, born 7 April 1870. Married E.L. Underhill. (6) Ida Bell, born 20 November 1871. Married E.J. Moorhouse. (7) Lewis Christian, born 21 November 1874. Married Rose Simpson. (8) Edward Albert, born 25 August 1877. (9) John, born 26 August 1880. He died as a child. William Zabriskie died 1 April 1910 and is buried at Mt. Pleasant, Sanpete, Utah. William’s wife, Christine, died 28 April 1908 and is buried in the same cemetery. This history was written by Edith P. Walker, assisted by Oreen Walker, Vida Lystrup, Marion Lund, Mada Lund, Murvel Walker, and Cal Christensen. Source: Isaac Higbee and Sophia Somers Family Magazine 1958 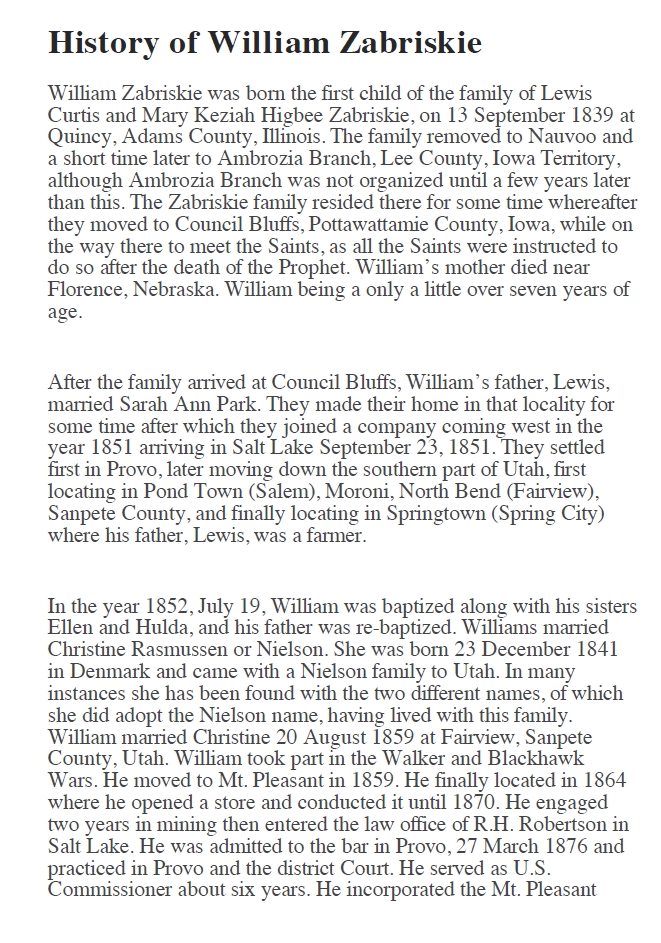 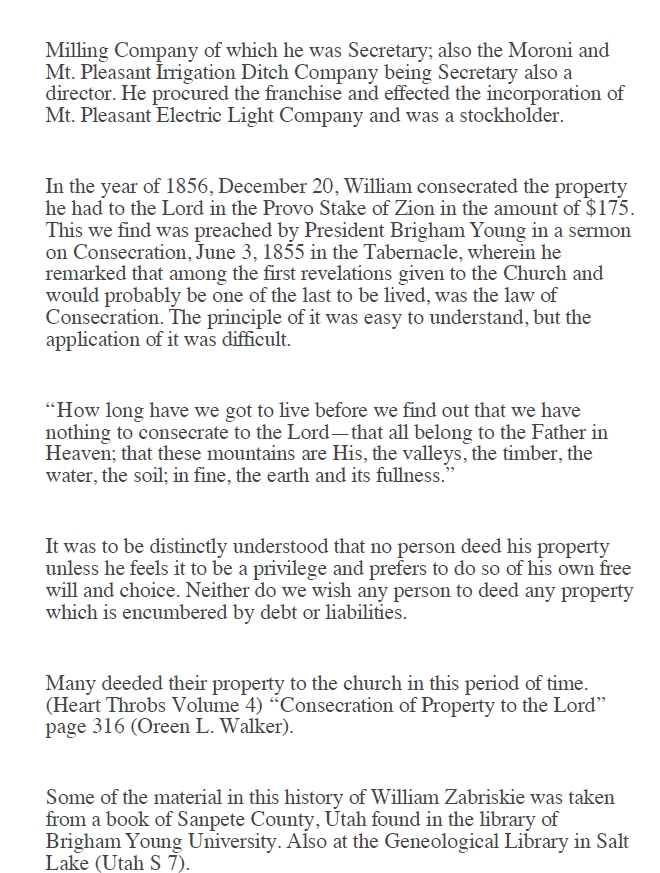 (The following comes from GENI) 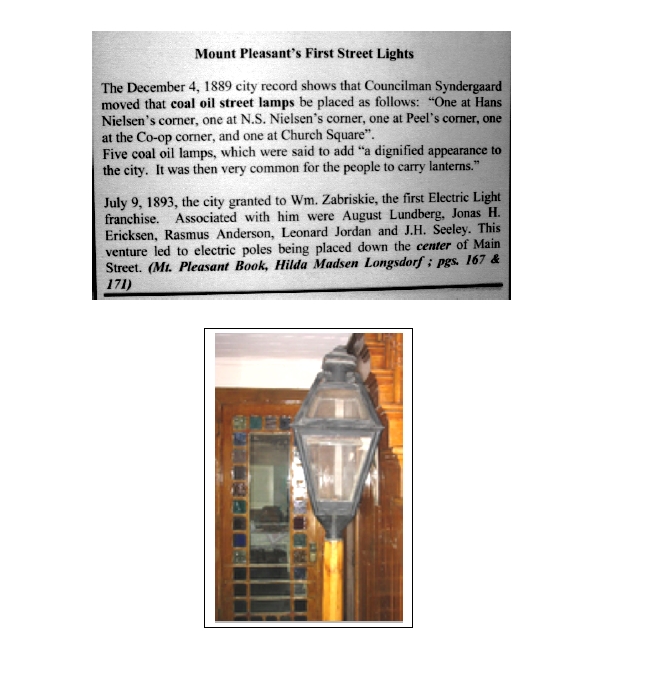