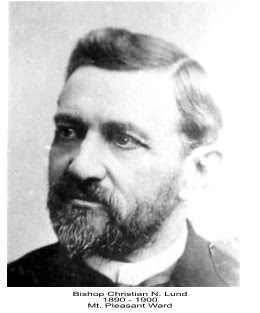 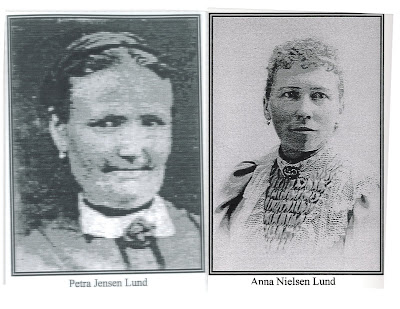 Christian N. Lund was born in a little straw thatched dwelling lying by the roadside just out of Seest, Pr Kolding, Denmark, January 13th, 1846,of good honorable parents. He received a splendid common school education and was so proficient in his studies that the principal of the school offered to put him through college and give him opportunity to work for his board, but his parents having embraced the religion of the Latter-Day Saints, chose to ignore the offer. He was baptized into the church March 21st 1856. At the age of 19 he was called to labor in the ministry as a missionary in his native land, and did so well that he was soon appointed president of a branch.

Alone and without friends, at the age of 22, he took what was the same as steerage passage on the last sailing vessel to cross the Atlantic with Mormon immigrants. The voyage lasted fifty seven days. the weather was bad, disease was rampant ofthe vessel and forty one souls died on the voyage. He crossed the plains with the last ox team that carried Mormons to Utah, arriving at Salt Lake City, September 25, 1869. He worked some in Cottenwood and Echo canyons. On October 9 of the same year, he married Petra A. M. Neilsen, an immigrant girl from his native country. On the evening of their marriage they started for Sanpete with an ox team driven by Lars Neilsen of Ft. Green. Arriving there they started out to end their "honeymoon" trip by walking to Mt. Pleasant, carrying all their earthly possessions in their two hands. But they overtook Aaron G. Omen, with his ox team and rode with him to this city, arriving on the 18th day of October 1869, living for a time with his brother Neils, who was here. They moved to Moroni in the spring of 1870 and lived as did many others in a cellar, or dugout. He took up land in Wales, but fate or circumstance drove him back to Mt. Pleasant, where his mission seemed to lie and he has been prominent and well known for over fifty years. In 1876 he was set apart as one of the seven presidents of the 66th quorum of seventy. He clerked in the first Co-op store,worked in the canyons and at farming. He was a member of the United Order anddid some work on the Manti Temple.

In 1879 he went on a two-year mission to Minnesota in company with Erick Ericksen, which mission was filled with honor. To know the circumstances under which he went and labored on this mission would apall the strongest elder of today. In 1882 he was elected a member of a constitutional convention which endeavored to procure statehood for Utah. On August 21st 1882, his wife died, leavving himn with five small children.

On October 9th, 1884, he married Anna Neilsen, a lady who had lately arrived from his native land. To this union was born six children, five of whom survived. On December 5, 1907 she died leaving him with these five living children and one Toral, (Torval) deceased. Since her death, her daughter, Amanda Lund Christiansen died in 1910.

In 1884 he was elected Mayor of Mt. Pleasant, was re-elected in 1886 and re-elected in 1888, having previously served two terms as a city counselor and two terms as city recorder. In the fall of that year he toured all Southern Utah in company with Cyrus H. Wheelock and Wilford Woodruff for his church in the interest of the temples. In 1887 he was elected superintendent of the Co-op store which position he held for seven years. In 1888 he was elected a member of the legislature and upon his return home was twice elected Justice of the Peace.

He served as a ward counselor to Bishop William S. Seely. In 1890 the two Mt. Pleasant wards were united as one and he was chosen Bishop. This made the largest ward in the church at that time. He held this position and served with unswerving fidelity for twelve years. In the fall of 1893 he was again elected to the legislature from a district comprising of Sanpete, Juab and part of Utah Counties. He later served as U.S. Court commissioner for Sanpete and was judge in a number of cases. He also served as county U.S. Land Commissioner.

He was closely connected with the public schools and was one of the state's strongest champions of education in every phase. He served as a trustee and school board member for over thirty years with singular credit and ability. He supported every school house from the smallest to the two large and beautiful structures of today. His efforts in educational lines extended farther than this district for he was a board member of the Snow Normal------------at one time offered the presidency of the old Union Hall. Upon this occasion he delivered one of the most eloquent political addresses ever heard in this city.

On May 1st 1896, he departed for Europe to take charge of the Scandinavian mission, embracing the countries of Norway, Sweden and Denmark. He filled his position with great credit and even made some history while there, as the people he represented had some controversy with the government and he made an able written defense throught the U.S. Minister for his people to the King of Denmark. He traveled over much of the European Continent and saw many of the most noted historic places. Upon his return home in 1898 he took up his home duties again. In December of that year he was honorably released from being bishop of Mt. Pleasant and at a meeting presided over by Anthon H. Lund he was chosen and set apart as the first president of the North Sanpete stake, which office he filled to the satisfaction of everyone, until honorably released because of failing health fourteen years later. At the time of his release he was set apart as Patriarch which position he held and ministered in up to the time of his last illness.

Before passing away he called each of his children to his bedside and gave them such a blessing and such advice and counsel as his feeble condition would permit. His last days and nights, when he could talk, were, to his family, the most inspiring of his life, and not one of them can ever forget the magnificent nobleness of his mind and spirit, when the poor broken body was slowly going into dissolution.

He has, in his life-time preached more funeral sermons than any other man in this section. As a funeral orator he was unsurpassed and was generally at his best in that capacity. As an expounde of the faith and a defender thereof he was second to nonein ability and knowledge. The people mourn him as a father who has served them unselfishly and left with them the noble example of his pure and stainless life.
Posted by Kathy Rigby Hafen at 10:08 PM No comments: