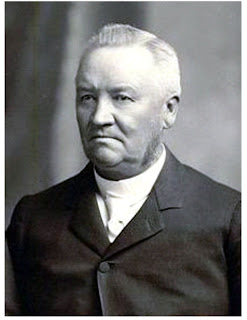 Anthon H. Lund was a Latter Day Saint immigrant from Denmark.  In 1862 Anthon settled in Sanpete County at the age of 18, and set out to make a living.  He worked as a farm laborer-digging potatoes and threshing wheat. He repaired harnesses and made shoes.
In 1866 a telegraph school was set up in the Brigham Young School House in Salt Lake City. Anthon H. Lund was amongst those chosen to learn telegraphy. He was credited as being one of the most proficient.
He returned to Mt. Pleasant and set up Mt. Pleasants’ first telegraph office with an adjacent photograph gallery and traveling studio wagon.
He became President of the Manti Temple in 1891 and was called to be a counselor in the First Presidency of the Latter Day Saints Church in 1901.

Posted by Kathy Rigby Hafen at 1:00 AM No comments: