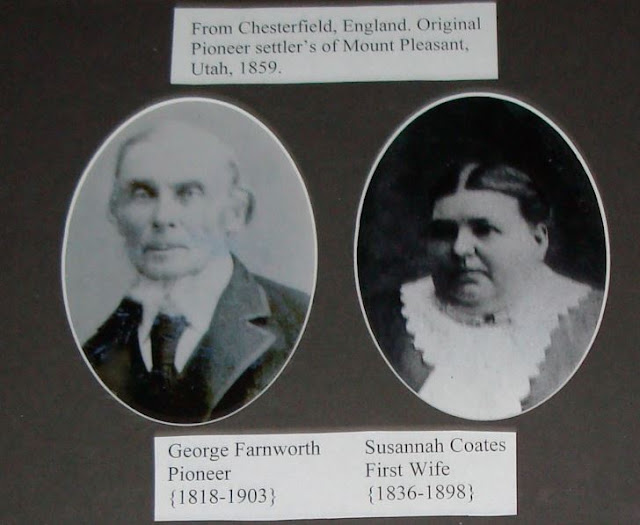 George was born in France, even though he was English. He father was in the English Army and stationed in France at the time of his birth. George had one younger brother, William Richard who was born in Ireland on July 3, 1820. His parents were Joseph and Margaret McBride Farnworth.

Susannah was born in England, the daughter of Joseph and Anne Dutton Coates. She was one of fourteen children. Her brothers and sisters are; Charrlotte, James, George, Mary Ann, Elizabeth, Everett, Joseph, John, Thomas and William (twins), Hyrum, Eliza Jane and Emaline Ann.

George was a blacksmith by trade. He married Elizabeth Bustard on June 24, 1840. Elizabeth was born in Sheffield England.

George and Elizabeth heard the Mormon missionaries and joined the church. They had one son, Earl in 1847. That same year, they set sail for America. They lived in St Louis, MO where Elizabeth and their son, Earl passed away in 1849.

George then married another Elizabeth, Elizabeth Hitchins in 1850. Elizabeth was born in Glowschester, England. They did not have any children and on March 7, 1853, Elizabeth passed away in St. Louis.

George came to Utah alone, arriving on July 18, 1853. He was baptized or re-baptized as was the custom back then, on October 30, 1853 in Salt Lake City. Here he met Susannah Coates. They were married on December 12, 1853 in the Endowment House in Salt Lake City, UT. In 1855, they moved to Battle Creek, UT or Pleasant Grove as it is now called. In 1856, they were called by Brigham Young to help settle a new town called Hambleton or Mt. Pleasant as it was commonly called. They were received with a hearty welcome and given their allotments of one city lot and 20 acres of land. George continued to work his trade of blacksmith. He was know to be “an excellent shoer” by many in the town. He helped keep the oxen and horses shod. George and Susannah had 13 children….

In 1860 he was chosen to be on the committee for the 24th of July celebration. During the celebration George gave the two following quotes.

“May the people of Mt. Pleasant, like the parts of a well-made machine, work together”

George was very active in both civic and church. Many records are found in the Mt. Pleasant History book. He was a major in the Black Hawk War, sent out to track down Indians. He was one of the first Sunday School teachers in 1865. He was elected first City Recorder in 1868. He was ward choir director, Tithing Clerk and Bishop. Many times he was called to help pioneers coming to Utah. He had to deal so much with the disease Cholera. One trip so many parents died of Cholera, there were 53 children left for him to find homes for.

George wrote a letter that was published in the Deseret News on March 3, 1871. He said that on an account of a very mild winter, fears of the scarcity of water during the coming summer for irrigation purposes have been very general throughout the Sanpete Valley. But all such fears have been dispelled by the abundance of snow which has fallen during the two or three weeks prior to the date of this letter.
On February 22, 1861, George took a plural wife, Mary Jane Allen. They were married in Mt. Pleasant. George and Mary had eight children, John William, Charles Henry, Nephi, Brigham, George Heber, Mary Violet, Alfred Lorenzo and Susanna. The children from George and Susanna treated these children as their full brother and sisters. They called his plural wife, Aunt Mary.

When the Manti Temple was completed George began doing for his kindred dead. One day on his was to the temple to do the last names he had, a wonderful thing happened. This is in his own words. This morning about 10:00 while traveling between Pigeon Hollow and Ephraim but the grave yard, I felt a very strange sensation, as I have never before experienced. Under this influence, I went along and as I looked ahead, it seemed that right in front of me there was a vast multitude of men. To the right and a little in front stood a large man, who would weight about 242 pounds. He waved his hand and said, “They are your kindred and we have been waiting for your temple to be finished. We want you to do for us what we cannot do for ourselves. You have had the privilege of hearing the Gospel of the Son of God. We have not that great blessing.” Just then I looked at them and saw that they were all men and through it strange that there were no women. I tried to recognize some of them, but knew none. I was thinking, “how can I find out their names?” when it appeared that a voice by me said, “When that will be required, it will be made know.” Just then the tears were rolling down my cheeks and in the humility of my soul I shouted, “God help me. God being my helper, I will do all I can.” It seemed as if the whole host shouted as if one voice, “Amen”. I cried and cried aloud, while wiping my eyes and face. After I could control myself, I looked ahead and all had gone. When I got to Ephraim I felt so over come, I had to tie up my team and rest before I could go to Manti.

When George arrived at the temple, the recorder handed him some sheets of names and said, “Brother Farnworth, these are for you.” The recorder was Moses Franklin Farnsworth. He had just received them from England. Some of the names went back to ancient times. He was their representative, to help them attain perfection. George and his family were faithful in performing the ordinances for them. There were 300-400 names on the list.

George lived a full and productive life. He passed away July 11, 1903 and was buried in Mt. Pleasant. 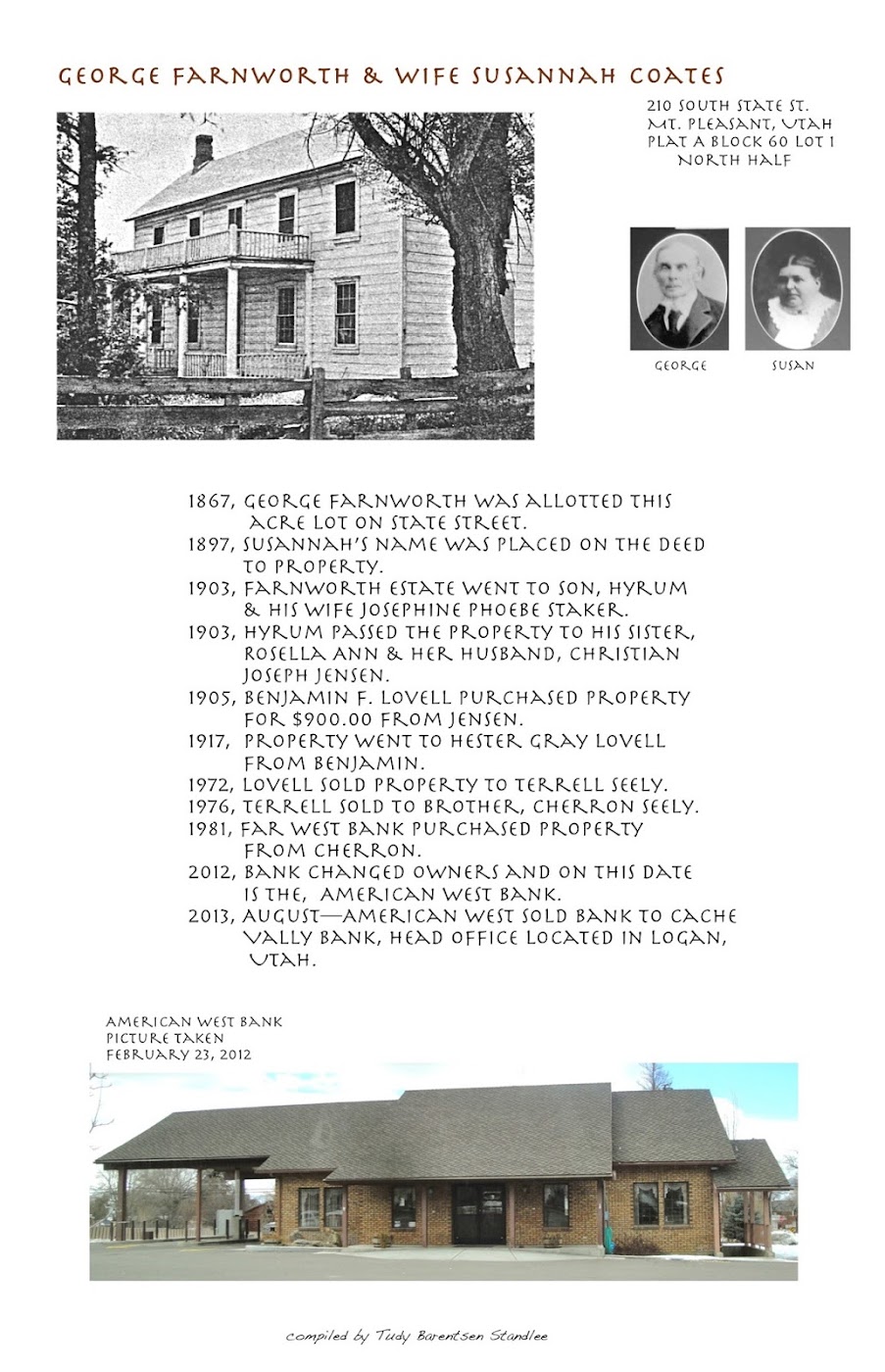