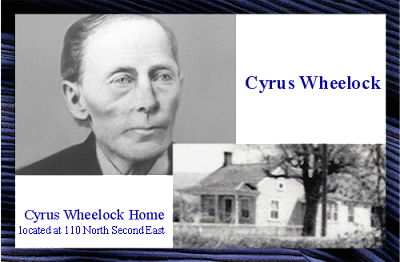 Cyrus Wheelock (1813-02-28 – 1894-10-11) was an early leader in The Church of Jesus Christ of Latter-day Saints. Among other positions he was the first president of the Northern States Mission. He also wrote the words to the Latter-day Saint hymn "Ye Elders of Israel."
Wheelock was born at Henderson, Jefferson County, New York. Wheelock was baptised a member of the Latter Day Saint church on 1839-09-01. Shortly afterward, he served as a missionary in Vermont. In 1844, Wheelock tried to convince Governor Thomas Ford of Illinois to release Joseph Smith, Jr. from Carthage Jail. Wheelock had given Smith the gun which he had when the mob attacked the jail at Carthage.
In the early 1850s, Wheelock served a mission in England and presided over the Manchester, Liverpool and Preston Conferences. In 1853, Wheelock was a counselor to Isaac Haight, president of the camp of Latter-day Saints waiting to set out from Keokuk, Iowa. Wheelock then was the captain of one of the pioneer companies that crossed the plains to Utah Territory. Wheelock settled in Mount Pleasant, Utah Territory. He wrote several hymns while living here In 1878, Wheelock was made president of the Northern States Mission which then consisted of the states of Michigan, Wisconsin, Minnesota, Iowa and Illinois. Wheelock served as mission president for just over a year. He died in Mount Pleasant, Utah Territory. He is buried in the Mt. Pleasant Cemetery.


click to enlarge
When we first started this blog  in 2008, I chose Cyrus Hubbard Wheelock as of first "Pioneer of the Month".  His contribution to our history in Mt. Pleasant and also Church History is more than can be adequately expressed.  After posting just a few comments about this wonderful man, I ran onto his history that was submitted to the Mt. Pleasant Pioneer Historical Association.  It is on yellowed parchment.  I want to share this with you, and will post it on his "Pioneer of the Month"  page as well.
Posted by Kathy Rigby Hafen at 4:28 AM 4 comments:

Posted by Kathy Rigby Hafen at 1:15 AM No comments: