Henning Pedersen Pihl was born the 26th of February 1799 in the small parish of Poulsker on the farm Dyndebygaard, just down the road from the Poulsker Church.  Henning's father was Henning Pedersen also, and his mother was Ane Olsdatter.  Henning was raised with two older sisters -7 and 9 years older (his parents had lost four children in between) and his mother died when he was two years old.  His father married Kirsten Pedersdatter the next year.

In 1818, when Henning was twenty, he moved to another parish two miles west of Poulsker, called Pedersker.  He had taken the last name of Pihl. (A pihl is a poplar tree or willow that is grown on the island.)  Under the "Names Act of 1828" Danes were required to take surnames.  Henning was probably associated with or worked on a name Pilesgaard (or Pihlgaard or Piilgaard) from which he took his name.  There are several Pilegaard homes close to Dyndebygaard in Poulsker. Willows were used in home building in Utah as lath on which plaster was applied to finish the interior walls of a home or building.  There is a log home built by his grandson, Christian F. Peel in which willow branches were used in this manner.  The home is located about two miles southwest of Mt. Pleasant, Utah. 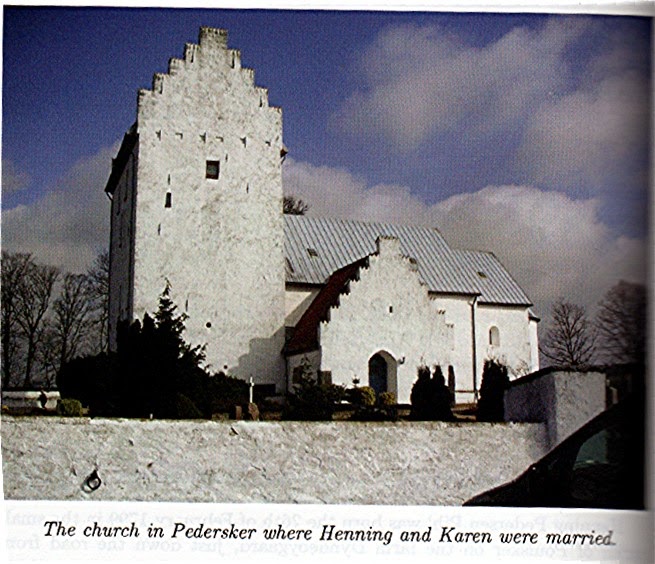 Henning, Karen and Caroline were baptized into the LDS church November 11, 1851 by Hans Peder Jensen.  They went during the night to the beach where they were baptized.  They were some of the first members on Bornholm.  They were persecuted greatly by their fellow countrymen.  Henning, Karen and Caroline chose to immigrate from Denmark the fall of 1852.  They received their "Going Out" permits November 6, 1852.  They sailed with 25 adults and 11 children for Copenhagen to join other Scandinavian saints.  They sailed for England on December 20th via Keil.  Brother John Forsgren was their leader.  They left Liverpool on January 16, 1853 with 297 saints on the Forest Monarch.  They landed in New Orleans on March 12, 1853.  Then they traveled up the Mississippi River to Keokuk, Iowa.  May 21, they left Keokuk and traveled by ox train to Salt Lake City arriving on September 30, 1853.  They were the first large company of Scandinavian saints to emigrate to Utah.  The LDS emigration records list Henning as a doctor and also the last name is spelled Piil.

Karen died November 30, 1853 in Salt Lake City, two months after arriving in Utah.  Shortly after her death Henning and Caroline moved to Lehi.  The following year Peder and his wife Christiane came to Utah.  Shortly after that they all traveled to Salt Lake, they could not find Karen's grave.  To this day we don't know where she was buried.

Caroline married Hans Y. Simpson in 1855.  Henning married Johanna Hansen in the Endowment House in SLC on May 23rd, 1856. Henning lived in Lehi about five years.  After the Utah war he and his family traveled to Ephraim passing through Salt Creek Canyon on June 4, 1858 unarmed.  The following day several pioneers were massacred by the Indians there.  Shortly after they moved to Mt. Pleasant.  Henning helped build the fort.  He settled here and lived in Mt. Pleasant the rest of his life.  He built a small home on the southeast corner of 300 west and 400 south.

Following the death of his second wife he married Hannah Louisa Frederikke (probably Mina).  In the 1880 census he is listed as blind.  Also at that time he and his wife were caring for his wife's granddaughter.  Her mother had died and her father was serving a mission.  Henning died August 6, 1885.  He is buried in the Mt. Pleasant City cemetery with his second and third wife.


The following is research on the Henning Peel home done by Tudy Barentsen Standlee. 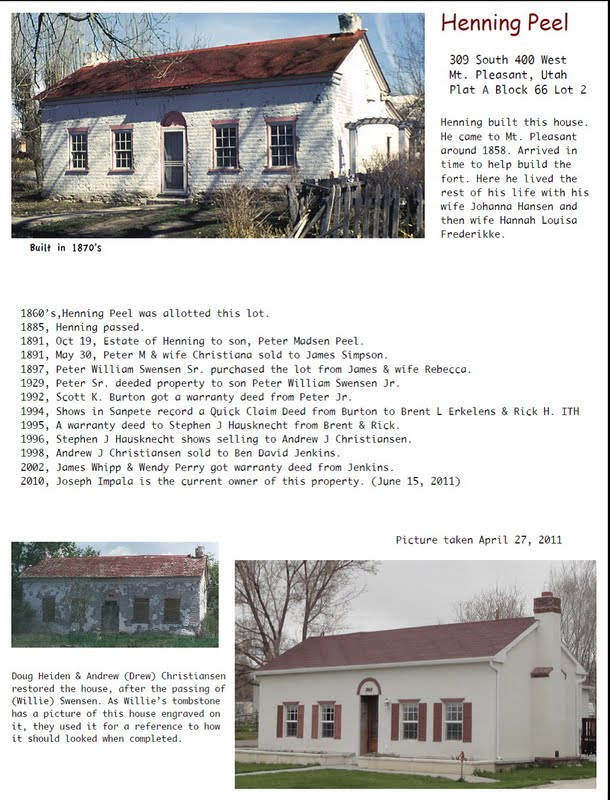