Philip Borresen was born March 1, 1822 at Scow-Husine, by interpretation from the Danish "Forest Mansion", East Egesborg, Skjealand, Denmark.  His parents were Peder Christian Borresen and Maren Jorgensen Borresen.  A younger brother, Phillip's twin, died at two days of age .  Records from Denmark give the number of children in his family as eleven.  Phillip being the ninth child and a younger brother the who survived, Neils Henrick, being the eleventh child.

Strong and healthy children they were, from all accounts.  It appears that the parents were at least moderately well to do.  The children were taught to work and to take good care of the things with which they were blessed.  They received a good school education.  Their father, Peder Christian being a professor, and one who followed the vocation of teaching for about fifty years.  A sorrowful event occurred when Phillip was only four years of age.  His dear mother, Maren Borresen passed away leaving the young infant, Niels to be cared for by another.  However, a good kind young woman came into this Borresen home and she cared for the baby, Niels Henrick.. She had then, a child of her own, an infant daughter named Cathrine Amalie Rasmussen.   The mother was Karen Christiane Kirstine Rasmussen.  Her baby was only a few weeks younger than Philip's baby brother Niels Henrick.

Philip Borresen was baptized a member of the Church of Jesus Christ of Latter Day Saints in Denmark on 8 January 1853.  His brother Niels on 12 April 1856, and Niels' wife, Johanne Marie Nielsen Borresen 9 (or 12) April 1853.

Preparations were made for the journey to America, Zion with several hundred immigrants.  On 24 December 1853 the Borresen brothers, Niels' wife J. Mare, and it seems a sister Trine A. B. Christensen with her husband Peter Christensen and their two young daughters, Ane and Sophia Jensine and Niels' daughter, Henrik Lotte Marie Borresen, boarded the sailing vessel, "Benjamin Adams" and sailed away to their new home among the Saints.

During the voyagethe little daughter of Niels and Mare became ill and died and was buried in the Atlantic February 1854.

The ship landed at New Orleans, Louisiana.  During the voyage up the Mississippi, they saw burly negroes  loading huge barrels of molasses onto boats.  Also they saw crocodiles sunning themselves on the river banks.

Ere long, ox teams were procured, provisions also, and this group joined and became part of a Pioneer Immigration Company to cross the plains, bound for Utah.

Sorrow gripped their hearts again, when in March, the little daughter of Peter Henrick Christensen and their sister Trena, Sophia Jensine Christensen passed away.  And then their sorrows were again increased when the beloved husband and father, Peter Henrik Christensen also passed away in April.  It was a common occurrence for someone of this Pioneer Company to pass away.

As Philip's brother and sister lived at or near Salt Lake City,  it is supposed that Philip did also.  They received their endowments at the old Endowment House in Salt Lake City in 1857.

Not much is known or recalled of Philip for the next year or two.  Doubtless, he also lived at Spanish Fork near by his brother, Niels.  Also he probably  served along with Niels during the Walker Indian War.

The History of Mt. Pleasant by Hilda Madsen Longsdorf  proves him there in the winter or early spring of 1859.  He furnished ox teams and labored along with his brother and their companions to construct the fort and completed it in July.

Among those with whom they worked were John Fechser, Svend Larsen, John Eletsen,  They grubbed brush, cleared the ground, plowed the land, planted crops and gardens with eager haste to procure food.  Niels  Borresen was a skilled horticulturist.  He planted and cared for fruit trees.  He believed himself to be the one to plant the first apple tree in Mt. Pleasant.  He also operated a grist mill which was built and owned by the aforesaid men.

Philip and Rachel J. Borresen took into their home Indian Children, probably orphans to rear.  As tradition tells us they were kind and kept the children neat and clean and loved them dearly.  Rachel, it seems had none of her own.

Doubtless Philip served along with Niels in the Black Hawk Indian War.  We do not know much oabout this family, nor the date of Rachel's death.  Philip married Martha Christine Gottfredsen at the Old Endowment House in 1867.  She was the daughter of Jens and...... Gottfredsen on 14 October 1868.  Philip passed away, probably from diptheria at Fort Ephraim.  Christine remarried to George Tuft by whom she reared a family; some of whom lived and died and buried there.    (author unknown) 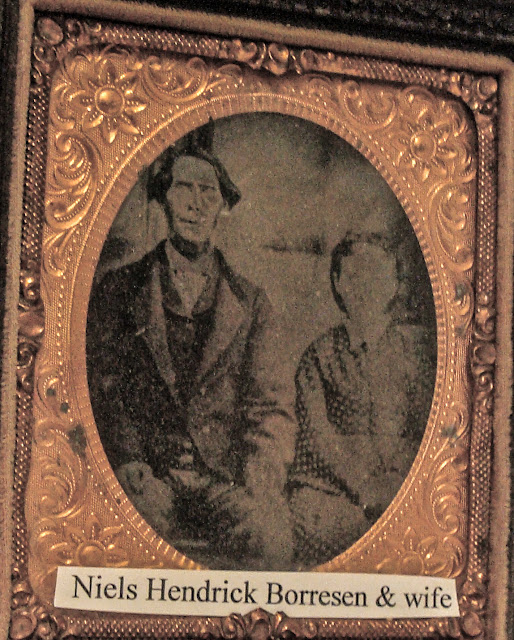 
Cathrine Amalie Rasmussen was born October 18 1826 in Denmark.  As records were lacking, the name of her father is not known.  Her mother was Karen Christiane Kerstine Rasmussen Borresen.

First records show that "Trine" was brought as an infant by her mother into the home of Peter Chrisian Borresen of Egesborg, Skjaelland, Denmark.  Kirstina ws given the care of another infant, the Borresen baby, Niels Henrick.  His mother had passed away at the time of his birth or in his young infancy. (2 Aug 1826).  And so the two babies grew up together as twins and were nursed at the same breast.  Niels' new mother must have been a fine noble woman as proved by the fine character of her two babies.  They loved each other as their own brother and sister throughout their long, eventful lives.  And when speaking of each other they would say "my sister Trine" or "my brother Niels".   In fact none  of their families knew different.  Certainly, none of Niels Borresen's family knew but what they were actually brother and sister.   And from all appearances, Peter Christian Borresen, Trine's step father was a real father to her.  She took his surname in Denmark where they grew up to maturity.  Their father was a school master and his children were educated, and were trained in various occupations.

The Christensens accepted the gospel in Denmark as taught by early day missionaries.  As also the two Borresen brothers, Philip and Niels, and Niels' wife Johanne Marie Nielsen Borresen,  These were baptized in 1853 and they left Denmark 24-25 December 1853, bound for America on the sailing ship, Benjamin Adams.

In February, Niels and Marie Borresen buried their baby in the Atlantic.  and on 17 March, the little three year old daughter of Peter and Trine B. Christensen passed away and was buried enroute to Zion.  Cholera took its troll.  There were births, death and marriages on board ship.  The converts were many times tested, yet they wavered not.

These joined the pioneer emmigration company of Hans Peter Olsen and took up the trek across the plains toward Utah.  Sorrow was a common lot.  On 5 April 1854, Trine saw her beloved husband Peter pass away from the effects of choloera.  It seems he was buried beside the trail.  There was not much time for tears.  Again they took up their journey.  It was not possible for many to ride in the wagons.  some had to walk.  Niels H. Borresen, and also Philip walked all the way to Utah.  About ten months after starting, they arrived in the Salt Lake Valley on 5 October 1854.

For awhile this company of Danish lived in Salt Lake Ciry, but soon Trine became the wife of a young fine German, John Frederick Fechser on 14 Jan 1855 in the Endowment House.  They were married for time only.  Fechser had lost his wife rosin F. Keyser enroute.  Trina reserved the privelage of bein sealed by proxy to her beloved Peter at the same time.  And later, the little daughter, Jensine Sophia also was sealed by proxy at Manti Temple to her parents as was the daughter Ane Christensen.

Ane became the plural wife of Peter Monsen or Mogensen of Mount Pleasant, Sanpete, Utah.  He was the son of Mogens Nielsen, born 16 Dec 1775, Langland Denmark and Karen Jorgensen Nielsen.

References:  Autobiography of Niels H. Borreson, Spring City, (not available in Mt. Pleasnt)
Posted by Kathy Rigby Hafen at 1:00 AM No comments: