James and Christena Christensen ~ Pioneers of the Month ~ July 2010

the following is taken from Knudsen Chronicles by Shirley Parkin Porath


Christena's early life and experiences coming to Utah are chronicled in "Willie Handcart Pioneers," chapter 15.  Saints in Salt Lake City provided food and shelter while the members of the Willie Company rested

and recuperated from their arduous trek.  Information about Christena's life after she reached Uta is found in a short history written by her daughter, Annie.

"The family lived as best they could, doing whatever they could find to do to keep body and soul together.  When Sanpete County was colonized, Mother and the two older girls, Hannah and Christena, remained in Salt Lake City to work.  In order to live they had to work every day, so they were not able to go to school.  Finally these two girls went to Ephraim to join their mother and their younger sister and brother."

The journey of these two young girls to Fort Ephraim is related in Christena's own words:

"We managed to get to the town of Nephi thinking we would be able to get to Ephraim along with some people who might be going there to live.  After several days of waiting, we found a man who was going to drive a cow to that place.  We persuaded him to take us along.  We had to walk, but we wanted to get where Mother lived.  The weather was cold, and the only shoes we had were moccasins.  He drove the cow, and when we reached the Sanpitch River, he put us astride the cow while he waded and led us to safety.  Arriving at Ephraim at midnight, we went from house to house to find Mother and our younger brother and sister.  We finally located them and found them sleeping on the floor covered only by a quilt.  We cried for joy at beholding them again.  Cold and hungry though we were, we were happy together.  The next day we secured work and went to live with our employers."


Annie continued: "Christena worked for a time at whatever employment she could find.  At Ephraim she met James Christensen Harbro. Christena and James were married in Ephraim in December of 1859.  In the spring of 1860 they moved to Mt. Pleasant, Sanpete County, Utah, known at that time by the name of Hamilton.  Father and Mother thus became pioneer settlers of Mt. Pleasant.  There the name Harbro was informally added to his name to distinguish him from many other Danes who carried the surname Christensen.

"He helped build the old fort and many bridges and passed through all the hardships of those days, half of which will never be known."  Christena's brother, Andrew, and youngest sister, Anna Marie, lived with Christena and James for many years.  In his younger years, Andrew was known by the name Andrew Harbro instead of Madsen because there were so many other Madsens in Mt. Pleasant."

Hannah was one of the first children born in Mt. Pleasant.  from her biography we learn details about their family:
"Their home was a crude log cabin with a dirt roof.  It contained very meager furniture.  However, this was home sweet home to those faithful, devoted Latter-Day-Saints who came to this country from their native land in order to worship the true and living God and be among the people of Zion." 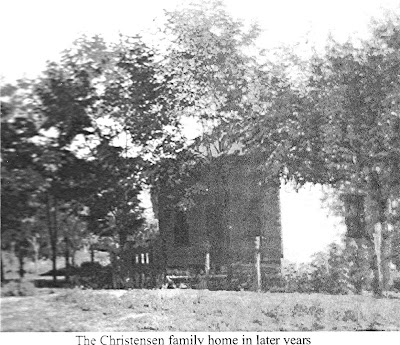 Family Life
Their daughter's autobiography emphasizes: "The holiest and sweetest thoughts coming to me from those early days are the lessons my parents taught me ~ my Pioneer Parents whom my soul revered.  Kindness, tenderness, and love filled their hearts and home each day."
"At the age of four years while riding to the fields in her father's wagon, Hannah was miraculously saved from death.  The horses became frightened because of a roller which her father had tried to the back of the wagon.  They dashed southward while the wagon box containing the child bounced and bumped over huge rocks and boulders until it fell to the ground.  Hannah crept from the wagon box and found shelter and safety under a fence where she was later found by her father and many others who witnessed the runaway.  They thought she had been killed.  They took her home where Christena wept with joy at seeing her child alive.  She carefully examined the tiny body and found Hannah had suffered only a few light bruises.  However, one horse was killed in this mishap."


Hannah often helped James in the fields and sometimes remained all night with her father while he irrigated their acres of land.

Annie wrote:  "I always helped my father in the fields.  I loved nature and did all kinds of outdoor work.  My father called me "Jim" as I was always on hand to work for him ~~lifting wagon boxes, hay sacks, and other things.  I did man's work in the field.  I rode horses and met with many accidents but was never seriously hurt.  I never gave up work because the boys were too small to help father."

In the fall of 1867, Indian threats increased, and James became a Minute Man during the Black Hawk War.  Many times he stood guard to protect property or rode out to search for and try to retrieve stolen cattle.

Because of their poverty, at times James "hired out" his older daughters to work for others.  Hannah tells mof working for C.N. Lund where she "did all kinds of work as well as their chores."  She also worked in chester for her Uncle Andrew Madsen for fifty cents a wek.  After three weeks of hard labor.."she was able to buy a pair of shoes with copper toes."  She also bought material for her dresses, which were all made at home.


Annie wrote:  "when I was twelve years old my father came to me and said, "I have hired you out to work for J.C. Jensen to care for their baby, a sweet little girl named Hattie."  I sang the baby to sleep and washed dishes and did other household duties for fifty cents a week.  I worked there off and on for years as they needed help.  As I grew older, I was paid seventy-five cents a week.  This helped to buy cloth for my dresses."  She worked all one summer for C. Brotherson.  "I went with him to the fields and helped weed his wheat fields.  He paid me twenty five cents extra for this work.  I lived there and worked all of one summer.
In later years of his life, James made several trips to the mining camps to take loads of grain to sell in order to get money to pay his taxes.  On one of these trips, he contracted a severe cold, but he traveled night and day when he learned of the death of his infant daughter, Caroline Andrea, eleven months old, who died 22 February 1880, while he was away.  When he reached home, he was grief stricken over the loss of his little one and remarked, "I see you are all here but one."

Again we quote from Annie's autobiography: "In the fall of 1880 when I was fifteen years old, my dear father became very sick with typhgoid fever.  Day and night for three weeks we watched over him.  One day he called me to him and said, "You stay with me.  You are more able than Mother."  (Christena suffered ill health much of the time.)

"I did the best I could.  I sat and held his hand and cried.  He told us what to do with some of the cattle and that he could not remain with us.  On October 22, 1880, at the age of forty-five, he passed away, leaving poor mother with four unmarried children to care for .....Hannah had been married in May.  Emma was thirteen, James was eight and Hans but five when father passed away."


Annie expressed her admiration for both her parents in this poem:


My mother, Pioneer so loved, so true


Can I sufficient honor show to you?

Shall I not speak your name among the rest

In looking back, my inner eyes behold

Tear-dimmed what cheerily you told.

How with your parents you left friends and home

Over rough rivers, plains, and hills to roam

To live the Gospel, newley then restored,

And be in fellowshiup with Christ, the Lord.

You heard His messengers His truth expound;

It touched your hearts, you hearkened to the sound,

Obeyed the call, did what it bade you do,

Repented, were baptized, and then you knew

That Christ had now His marvelous work begun:

A boy had seen the Father and the Son.

Converted by the Lord's own perfect laws,

You knew that Joseph Smith His prophet was.

The testimony of the Lord is sure,

His statutes right, His commandments pure.

With honest hearts you did His truth embrace,

Ready all hardships, even death, to face.

Hard, grievous trials in your path were cast,

But you proved brave and faithful to the last.

And now I bless you for the sacred touch

Of faith sublime for which you bore so much,

And gain the prize, Eternal Life with you..


Christena Passes Away
Annie wrote: "When we celebrated my birthday on November 7th, my mother was with us and was so happy.  My niece, Sina Clark, played a lively tune called 'The Cakewalk' on our organ, and how Mother danced around the table.  Howerver, within the following week she was stricken and suddenly passed away on the 15th of November."

Christena spent much time caring for Emma's daughter, Vida, who at the time was about five years old.  During her illness, Christena worried, "What will my little Vida do without me?"


About her mother, Annie wrote this tribute:  She was kind, generous, and full of faith.  She was loved by all who kenw her.  She knew the want and privation of pioneer life and walked her trail in this life uncomplainingly, with a smile on her lips and joy in her heart.  She taught her children the priceless heritage of the Gospel of the Son of God as she understood it.  If she could now see the faithfulness of her children and grandchildren, she would weep with joy and thank God for them all."