The following histories come from two sources.  The first from "Seely Family History"  sponsored by the Justus Azel Seelye Family Organization.  The  second from Family Search, told by Mary, herself to Annie C. Bills; a grandson's wife. 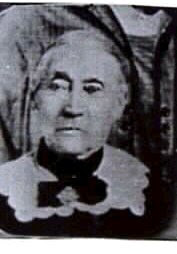 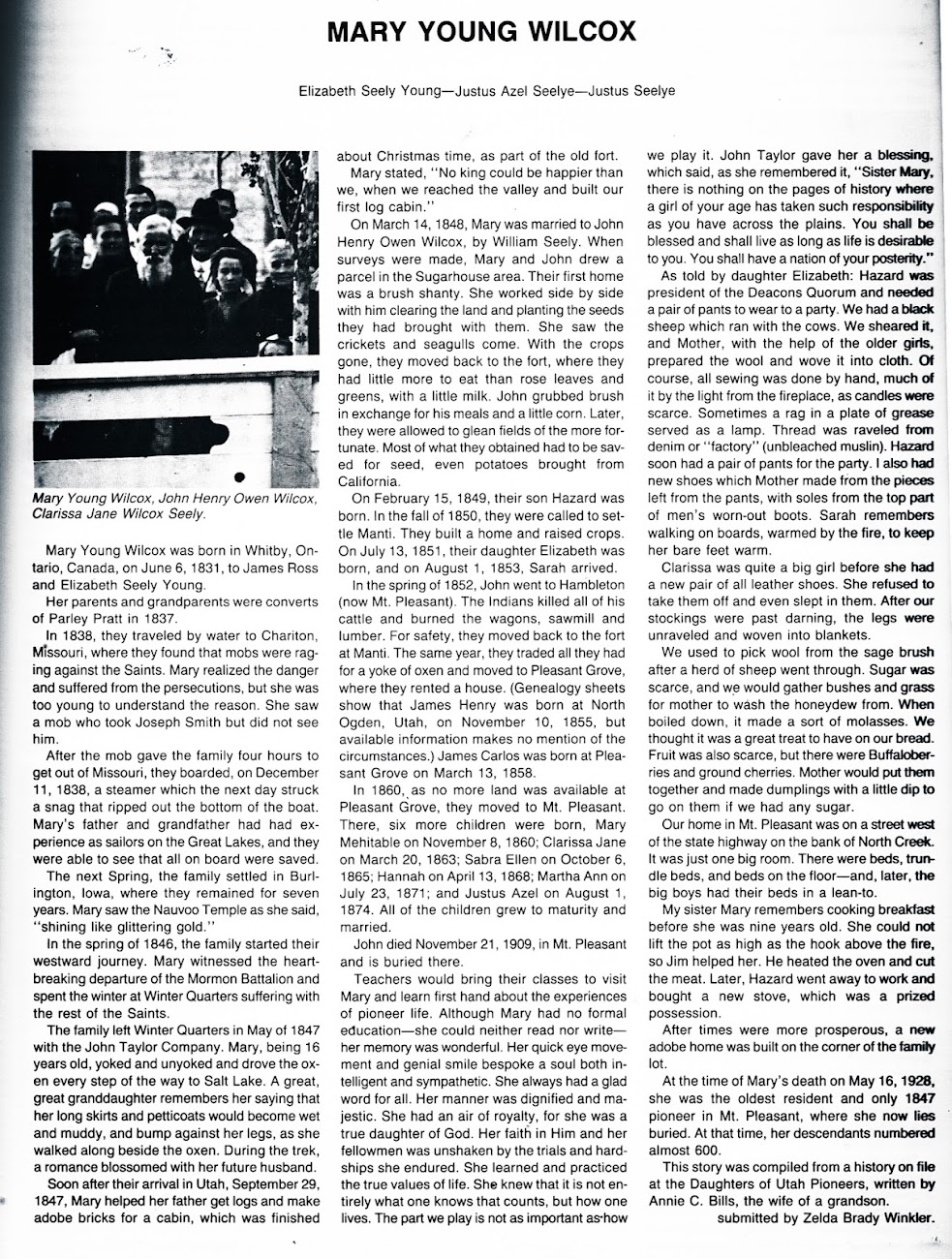 The History of Mary Young Wilcox


In 1837 Parley P. Pratt brought the gospel to her parents and grandparents and they accepted it and joined the Church. Their acceptance of the gospel, together with others, helped fulfill the prophecy which Elder C. Kimball made, when he told Parley P. Pratt, he would go to Upper Canada, even to Toronto, its Capitol, and find a people there, who were prepared for the fulness of the gospel.


In 1838 they emigrated to Missouri, leaving their home going to Toronto, and across Lake Erie, through the Erie Canal, down the Ohio River to the Mississippi River thence up the Mississippi landing at Sharidon, Missouri. When they reached the place the mob was raging and mobbing the saints.


Mary, but a small child, realized their danger and also suffered from their persecutions. She didn’t realize why they were persecuted, but she remembered the scenes and hardships of it.


She tells the story of seeing Isaac Laney, one of the survivors of Haun’s Mill massacre. He had seven bullet holes in his back and sic in his breast which he recieved at the hands of the enemy. No one thought he would live but he had been promised by the prophet Joseph Smith that he would not fall at the hands of the enemy. He recovered from the terrible wounds and made the journey across the plains and died several years later in the valley of the “Great Salt Lake.”


She also saw after coming to Utah, a woman who was one of the survivors of Haun’s Mill. She said the girl was going to the mill race for of bucket of water just as the mob was coming. She told how she threw herself behind a log to keep the mob from seeing her, but they spied her and shot, she thought as many as fifty bullets above and into the log, but she wasn’t touched by any of them. After the mob had gone those who were left cut twenty bullets out of the log that had lodged in it. She came to Utah and lived and died in Pleasant Grove. Her name as Mary remembered was Mrs. Foutz.


The Prophet’s brother William Smith had twin boys in his family and one of them was killed at a blacksmith shop where another massacre took place, his father and others were killed. The othe rwas wounded by lived and came to Utah.


In Caldwell County in the fall of 1838 she remembered seeing the mob who took the prophet, but did not see the prophet. The mob surrounded the town and sid if they didn’t give up the prophet, they would “Clean them out root and branch.” The prophet and his brother Hyrum were guarded by the saints, and when word reached them as to what the mob had said, they came out carrying white flags and told the mob they were ready. They were kept in jail all winter not getting out until spring. The mob didn’t keep their promise, they kept mobbing just the same.


The prophet (Joseph Smith) sent word to the saints to go some place for safety through the winter for they would be compelled to leave the site in the spring. The saints left, taking what few belongings they had with them. Some had only what the could easily place in a wheelbarrow. The mob came upon the little group who had come from Canada, and gave them four hours to leave and get out of the state of Missouri, they would pile up their blongings into the street, burn them and kill everyone.


There were two steamers which had gone up the Mississippi river just four days before, going for their last trip for that winter. The river had frozen up so they could not get where they had started for, so they had to turn back. Before a few hours they were up the Canadian Saints got on the steamer and sailed down the river. This was on December 11, 1838. The Steamers sailed nicely through the night and on the morning of December 12, it being clear, the men running the steamers thought they would race down the river as they thought they were out of danger. While thus racing, the steamer the saints were on, struck a snag in the river and ripped the bottom off the boat full length.


Mary’s father and her Uncle, were sailors, having sailed on Lake Ontario and Lake Erie, realized their situation, and quickly lowered the lifeboats, putting the women and children and part of their luggage into the boats, made to shore. All on the steamer were saved. They were landed in the snow on the shore into the state of Iowa. They could have gone on the other steamer and been taken on down the river to St. Louis, but they were glad to land in Iowa for they were only glad to get away from Missouri.


There were 15,000 saints driven out of Missouri. Many of this number were very poor. Some only had what they could carry in a grip or on their back. They were strangers in a strange land. Some had to go or be slain. The mob had told them if they would give up “Jo Smit, visions and their religion,: they could live there and be citizens with them, but they would rather die than give up their religion which meant so much to them.


In the spring of 1839 when the prophet and remaining saints were out of Missouri they settled in Illinois, the main places being Nauvoo and across the river in Iowa. Mary’s people settled in Burlington, Iowa, where they lived seven years, quite peacefully for a time. Their wasn’t much killing done there, like that of Missouri until they killed the prophet and patriachs in the Carthage Jail on June 27, 1844. After the killing of the prophet the mob thought “Mormonism” as they called it, would die out. The saints weren’t bothered so much for about a year and a half. Seeing that they would get all of their land and everything they had, they readily saw the achievements of the saints.


Mary remembers the Temple of Nauvoo standing out on the hillside, as she says, “shining like a glittering gold.” Brigham Young said they should not look back after they were driven out, but look forward, because that was build and had been dedicated to the Lord and they should not mourn after it.


In 1842 when the church was in a destitute condition, the saints were sick and suffering from hunger and cold, eighteen were called together by the prophet and the Relief Society was organized. There was a lady who came to Salt Lake whom Mary talked with, told her how the saints would divide the little of everything they had with those who had none. She said there was a case where one woman had a little corn meal for bread which she stirred with water and baked it had no salt. Another heard this and said she had a few spoonfuls of salt and she gave a tablespoonful of it wrapped in a paper to the one who hadn’t any. The ones who were sick were looked after and administered to by the well. Thus they lived in Nauvoo, when the mob was driving them again after the prophet’s death. Brigham Young told the mobs they would leave the country if they would only give them a little more time. In the fall of 1845 they began to leave. In the spring of 1846 they started on their westward journey across the plains. Brigham Young told the saints to fit themselves out the best they could for their journey.

They started from Iowa, after the saints got out of Illinois. After travelling about three hundred miles from Nauvoo, the call came from the government for five hundred of their young men to go to the Mexican war. This was the choosing of the “Mormon Battalion.” Here Mary witnessed the marching away of the Battalion. Here also was written the hymn by William Clayton “Come, Come Ye Saints” After the Battalion was packed with their pack, which weighed about thirty five pounds, a meeting was held and Brigham Young promised the men if they would keep the commandments of the Lord they should not meet the hostile foe, but that God would fight the battle for them. The scene that followed, she says she can never forget. Widowed mothers parting with, sometimes, their only sons, sweethearts, husbands and wives, a scene which only the ones who witnessed can realize the sadness of. The Battalion bravely underwent the terrible hardships as did their loved ones whom they left behind. She saw their parting also saw some of them as they returned to Salt Lake, after their march and travels through Mexico, California and around the Great Salt Lake. After the Battalion marched away they resumed their journey, traveling as far as the place they called Winter Quarters, where they camped for the winter.