My husband, Peter Hafen has deep roots in Mt. Pleasant soil.  We can find six generations on the Nielsen side of the family all buried in the Mt. Pleasant Cemetery.  We didn't have much information on the eldest, Niels Christian and his wife Maren Nielsen until just recently, we often wondered about them as no family records could be found. We know where their graves are located, but no history, no photographs have been found.  I recently found a few tips on familysearch.org and share them with those of you who might also be his descendents. If anyone out there can add more information, please let us know.

We discovered that they actually came over at the same time that Andrew Madsen Sr. did on the John J. Boyd in 1855 which left Liverpool on December 5th. There were 508 persons aboard and 483 of them were from Scandinavia. Just prior to their leaving Liverpool Apostle Franklin D. Richards  came aboard the John J. Boyd and made some very encouraging remarks and bade them farewell.  Elder Knud (Canute) Peterson became the church leader of The John J. Boyd after filling a mission to Norway and Denmark.  He was later called as President of the Sanpete Stake.  He was a very kind, fatherly man and very watchful over his flock and ever ready and willing to give kind and good advice to those under his care.

The John J. Boyd
It was a treacherous journey with bad storms.   Many became seasick. The ship was not equipped to hold as many passengers as there were. On December 19th a terrible storm came up and rocked the boat, tossing everyone from side to side and continued through Christmas Day, December 25th. Then on January 1st the storm was so terrific that one of the masts was split and had to be wrapped with chains. All the sails were taken down.

"The winds blew so hard the crew could not control the ship, so the sails were lowered and the ship found its own way through the water. Winter weather upon the Atlantic was so severe that the ship lost all forward progress made in the first weeks of the voyage. We had headwinds most of the way. When we were about one-third of the way over we were driven all the way back to the coast of Ireland.

The  shipmaster was Captain Thomas Austin. He ran a well-ordered company.  Rules of conduct were established.  A trumpet called the immigrants to prayer morning and evening, and religious services were held in English, Danish, and Italian.

The average voyage from England to New York aboard a steamer was 13 days, while the average trek across the Atlantic via sailing ship was 37 days.  But the voyage on the John J. Boyd lasted 65 days, nearly one month longer than the average sailing ship crossing.

During the voyage, sixty-two people lost their lives. That’s the highest death toll of Mormon immigrants upon any vessel crossing the Atlantic Ocean.  Even the six-month voyage of the Brooklyn from New York to San Francisco in 1846 claimed only 10 lives.


The captain became so discouraged over the unsatisfactory conditions that he forbade any to sing or pray onboard the ship.  But this did not prevent them from fasting and praying in secret which was ordered by President Peterson, after which better weather prevailed.


At one point during the   voyage a fire broke out, starting in the captain’s quarters and quickly spreading through the entire ship.  The fire burned through the floor and filled the ship with smoke.  The clouds of hot smoke nearly suffocated those who were resting in their quarters.  It was only after much work that the fire was successfully put out.  Some of the passengers and crew, fearing for their lives jumped overboard, and it was only after Knud Peterson assured the saints that they would put out the fire that panic ceased.  It was later revealed that Captain Austin had been drinking and kicked over a small stove in his quarters.  Precious personal cargo and provisions were lost in the accident all due to the Captain’s terrible addiction. (taken from "Voyage to America", by Hans Lorentz Dastrup. 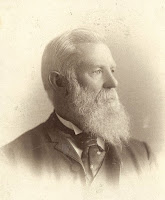 
We also discovered that the Nielsens were with the Canute Petersen Company in 1856. The wife, Maren, daughter Anna Catherine and another daughter, Karen are listed on the ship manifest.  However, Peter's 5th great grandfather Niels Peter Nielsen, who was also a son was not listed.  Then when they reached Winter Quarters they were joined by another group of Saints coming from England and Scotland.  And with that group were Peter's third great grandparents, William and Mary Margaret Morrison from Scotland.   Now we find the lost son, Niels Peter Nielsen  listed with the Canute Petersen Company. They all arrived in Salt Lake City in September of 1856.

About 320 individuals and about 60 wagons were in the company when it began its journey from the outfitting post at Florence, Nebraska (now Omaha).

Company members arrived in the Salt Lake Valley from 16-23 September 1856. This makes Niels Christian 51 years of age and Maren 53 years of age.

It would take too much time to enter into every detail that transpired during those intervals on our sad journey. Nevertheless in the spring of 1856 our faces still turning Zionward, we again commenced our journey from St. Louis, by way of Omaha, and from there crossing the plains by ox team. For six weeks we remained in camp at Omaha living in tents, waiting for the company to get ready. On the 26th of June, 1856 we commenced our journey across the plains. We were sixty wagons in all with Canute Petersen as Captain of our company. He was a wise and most efficient leader. During our journey our cattle stampeded five times. A young man from Denmark was run over and instantly killed, but otherwise there were no other accidents on the journey. On the 14th of July a herd of buffalo passed right through our camp. This surely was a great sight and as no accident occurred we were indeed very thankful for the preserving care which had been around us.

On the 23rd of September we arrived in Salt Lake City in good health and glad to meet many dear friends with whom we were acquainted .

While we were getting fitted out a number of us secured labor erecting a wall around a farm, and in about three weeks were fitted out.Our outfit consisted of sixty wagons and two yoke of oxen, with six to ten persons to each wagon.
President Peterson was our Captain and appointed as assistant captain for each ten wagons. We started on our journey for Salt Lake City, June 19, 1856. The first day's journey was a hard one.Some of our oxen were wild and we did not know how to handle them and consequently did not make much headway the first day. The following day we made good headway. It was very hot and our oxen became very tired, traveling with their tongues out, some of them getting overheated and dying.
We were compelled to leave some of our supplies, owing to our heavy loads and this was taken off and left.After a few  weeks journey we reached the unsettled wild west, where the buffaloes were grazining great herds.

One day there was a stampede and our oxen became frightened, rushing together, one outfit crashing into the other. The women and children became frightened, some of the wagons were broken and a few of our number were hurt and one man killed, which caused a gloom to pass over us. He was buried in a coffin such as we could prepare. We then repaired our outfits and journeyed on. A few of the buffalo were killed, dressed for beef and divided among our company.

Now and again the Indians were seen roaming from one side of the valley to the other and on occasions they would come to visit us. In order to maintain a friendly feeling, we would oft times give them some of our supplies and provisions such as we could spare. We were compelled to guard our oxen at all times when we were not traveling to prevent them from being driven away or stolen by the Indians. We were called together morning and night by the sound of a bugle to receive our instructions. Sundays, we had meetings and regular services were conducted, adding much comfort and pleasure to our journey.

Sometimes we had dances on the green grass and enjoyed ourselves as best we could. During the days while journeying along, nearly all of us walked except those who were sick and the smaller children. We went along laughing and singing the songs and hymns of Zion. We arrived at Salt Lake City, September 20, 1856 and on the entire journey of three months not more than a half dozen persons were seen outside of our own company. . . .
Madsen, Andrew. Autobiography, pp.1-3. (CHL)


The above journal entries and others can be found at:    https://history.lds.org/overlandtravel/companies/234/canute-peterson-company-1856 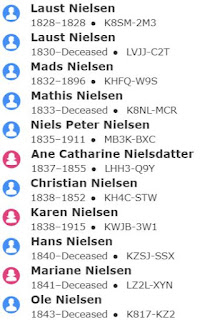 However, Niels Peter, Karen and Ane Catherine are the only ones we can verify. More information on Niels Peter and Bertha Marie can be found at: https://www.familysearch.org/tree/person/details/MB3K-BXC

Nothing more is known about Niels Christian and Maren other than they died in Mt. Pleasant. 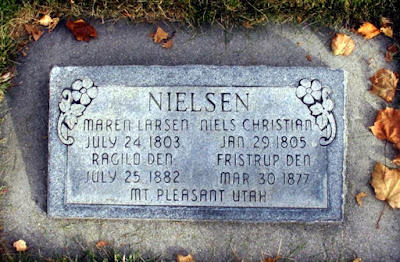 
Posted by Kathy Rigby Hafen at 9:39 PM No comments: